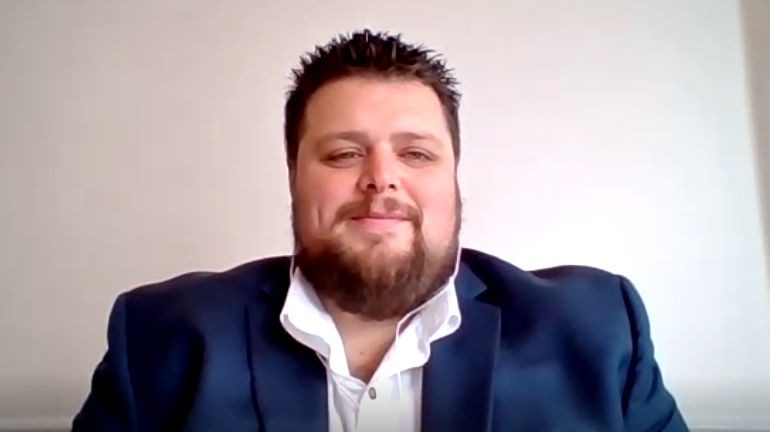 He got his first solid lead after just 3 days.

Since then, he’s closed 4 deals.

But there’s more to the story…

To REALLY understand the journey Chad is on, we have to go back 17 years.

Chad has faced more adversity than just about anyone I know. I’ll let him tell the whole story, but to give you an idea of what I mean…

There was a point where he didn’t want to keep on living.

There was a point where he was effectively homeless, with only the clothes on his back.

And then, there was a point where he ended up sitting on an airplane next to a guy named Andy McFarland.

Andy is one of the top wholesalers in the nation.

He’s one of the founding leaders of 7 Figure Flipping.

And in addition to his wholesaling operation, he also flips houses and holds a rental portfolio.

Chad, it turns out, was living in one of Andy’s rentals at the time.

And one year ago, in February 2019, they found themselves sitting side by side on a flight to Colorado. (Check out the photo for proof.)

That moment changed everything for Chad…

So I asked him to join me on the podcast today to share his story and talk about how he’s building his real estate investing business faster than just about anyone else I know.

…then watch the video above!

Oh, and remember how I said Chad was sitting next to Andy on a plane one year ago?

Coincidence? Or something more? That’s for you to decide…

Links and ResourcesReady to get more off-market houses? Learn how YOU can create a CONSISTENT, REPEATABLE marketing system that brings you MOTIVATED SELLERS... in just 5 DAYS... inside the "5-Day Marketing Blueprint Challenge!" This LIVE challenge starts August 16th and it's FREE to participate... sign up now!

Flip Hacking LIVE tickets for October 2021 are available now… and seats are filling up fast. If you want to learn the exact systems and strategies the nation’s top house flippers and wholesalers are using to flip 100s of houses per year, reserve your spot today. Hit the link below to sign up!

If you’re an experienced real estate investor and you’re ready to get around a community of active house flippers and wholesalers who will support you, hold you accountable, and push you to set goals that inspire you as you grow your business, check out 7 Figure Altitude and see if it looks like a good fit. If it is, I invite you to fill out a quick application to join. If you have any questions, reach out!

Want to continue your house flipping / wholesaling journey? Here are a few more resources to check out…

Facebook Group: We’ve built a community of serious investors who are learning and growing their businesses together. Join the Group on Facebook: https://www.facebook.com/groups/fliphacking/

7FigureFlipping.com: Learn more about who we are, our mentoring groups, upcoming events, and the causes we support at our website. Plus, grab some free downloads and other materials to help you on your real estate investing journey! Click Here: https://7figureflipping.com/

Find out EXACTLY what you need to be working on TODAY to do more deals, make more money, and free up your time.

Take The Quiz Below!